Hello, my name is Lisa, and I’m a coffee addict. Ever since I got my Keurig Coffee machine in late 2006, I’ve been a java fanatic. I try to limit myself to ONE cup of caffeinated coffee a day, and two decaf, but will occasionally go for an extra boost in the mid-afternoon.

I love my coffee machine, because it brews one cup at a time, and I like my coffee piping hot. It reminds me of the scalding coffee my grandmother used to make in her old metal espresso pot. No matter what brand of coffee machine I had before, the coffee was NEVER hot enough, or if it was initially, it didn’t stay that way. The Keurig, set at the maximum temperature, cranks out a cup of 192-degree fresh-brewed happiness. Ahhhhh….

So, the other day, I was at the supermarket purchasing some more of my little K-cups, and I met a guy who works for the company. He advised me that it’s much less expensive to order the coffee directly from Keurig, or from one of their distributors, because they sell boxes of 24 cups, and the ones in the supermarket and Bed, Bath & Beyond only have 18 cups. I told him I had some problems ordering directly from Keurig (they started sending me coffees I didn’t want/didn’t order), so he told me about a website for one of their distributors: www.coffeewiz.com.

Oh my lord…the selection there was incredible. I temporarily lost my mind and placed a huge order. It arrived today. Behold, my new stash: 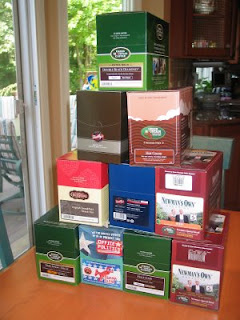 My husband loves the Newman’s Own, which is why I ordered two of those, and my eldest daughter likes to have Tea in the morning. My younger two kids are all about the Hot Cocoa, and the White Chocolate version sounded interesting, so I got that, too. I like the super-strong coffee, even if it’s decaf, so I always have plenty of those, too. The first one I tried (just now!) was the Double Black Diamond, an extra bold coffee for those really tough days when I need a kick in the afternoon. There was another brand on the site called “Jet Fuel” that I must buy next time!

My favorite purchase, though, is the “Office Politics: Obama Blend” from Coffee People. I haven’t even tasted it yet, but I’m really looking forward to trying it. They also had a “McCain Blend,” which I did not buy, although I would, if and when my friends Michael Lee or The Chief ever stop by for coffee and donuts. According to the website, they’re going to keep a running tally of the sales of both blends, and see who “wins.” Pretty clever idea, eh? Go Obama! 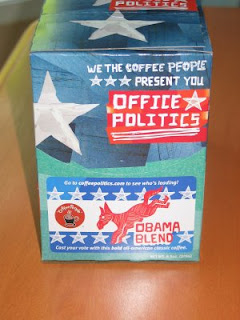