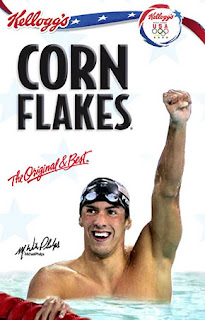 I’ve been reading reports that Gold medalist Michael Phelps is taking some serious heat from nutritionists for his decision to appear on the Frosted Flakes box for Kellogg’s, instead of the ubiquitous Wheaties box. He’s also agreed to appear on the Corn Flakes box.

Seriously…I know people expect the guy to be a role model, but this is ridiculous.

With 1/3 the sugar and double the fiber of Frosted Flakes, Wheaties is certainly a healthier choice, but let’s be honest: it tastes an awful lot like the box itself. Frosted Flakes are YUMMY. Sugary, yes, but it’s just one breakfast choice out of thousands, and eating a bowl of the stuff every once in a while is not going to turn anyone into a roly-poly couch potato.

Yes, childhood obesity is an epidemic in the United States, but parents need to take more responsibility for what they put in their child’s mouth. Instead of complaining about what box of cereal Phelps’ picture is printed on, how about you get your kids off the couch and bring them down to the town pool, like Phelps’ mom did, and have them swim a few laps? Add some fruit and fresh juice to your breakfast table, and offer healthy choices more often than the “bad” stuff, and you’ll be fine. It’s certainly more productive than blaming other people for “setting a bad example.”

The ultimate role model for a child is their own parent. If our kids are getting obese, it’s time for parents to stop pointing fingers, and take a good long look in the mirror. Chances are, you’ll find the real problem staring you right in the face.