Confession time: when it comes to plants, I have what is commonly referred to as a “black thumb”: I kill everything I touch. Doesn’t matter how hardy the plant is when I get it, within a few weeks, it’s toast.

The only exceptions up to this point were the two large houseplants that Rich used to have at his office. He takes care of them himself, because he sorta grew attached to them and hated to see me destroy them with my awful mojo. All of the other plants we have scattered about the house are fake, and so far, I haven’t managed to kill any of those yet (but trust me, if there WAS a way to slaughter a silk plant, I’d inevitably find it).

So, it is with cautious optimism that I report on the extraordinary survival of two plants that have been under my care for almost 2 years now. They were sent right after my father died, in November 2006, to be displayed at his wake/funeral. Afterwards, my mother divvied up the plants and tabletop florals my dad received, and even with my murderous track record, she gave me one. It had a green flat leaf plant in the middle, with a bit of ivy surrounding it. Very cute little plants. Much too young to die, really. I accepted them with a heavy heart.

It is truly a miracle that these little guys have not only survived, but apparently, thrived under my care. Maybe because they started as “death plants”, they’re immune to my horrible gardening energy?

All I know is, it’s been a year and nine months, and they’re still here. So, I finally got a chance to experience that “re-potting” situation I’d read about–you know, when plants do so well, they actually need to be relocated into a bigger pot? Yup…first time for everything, I guess.

So, here they are….perhaps you will remember them in your prayers tonight, just in case? Thanks. 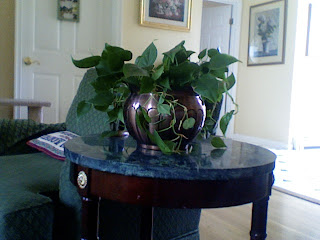 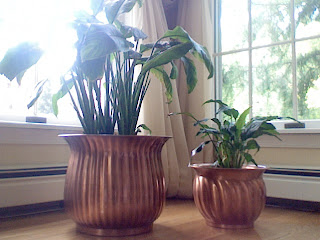 The other green plant (seen on the right), sitting next to Rich’s big plant. I hope they’ll be friends.