We had a few visitors to the backyard this evening. First, there were two deer: a painfully-thin doe and a badly-injured buck. They were feasting on our perennials and evergreens, and we did nothing to stop them because they looked like they really needed the sustenance.

Then, minutes later, Rich spotted a new bird on top of the feeder pole. We could tell immediately by the way his head rotated that it was an owl…an Eastern Screech Owl, to be exact. It was too dark to get a picture, and he flew off into the trees after just a few moments, but this pic comes close to what he looked like: 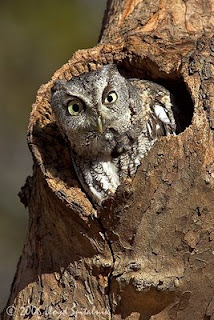 Reminds me of the owl on Mr. Rogers’ Neighborhood.

1 thought on “Some new friends”