For those of you keeping score, it’s been 10 days since the unfortunate “Golf Club to the Back of the Head” incident. Which means, it was time to remove those staples Rich had.

He was very brave–perhaps bolstered by the fact that he and his buddies took first place in their Member-Guest Golf Outing today. All hail, the power of the staples!

I tell you this much: the implement used to remove them is pretty nasty looking: 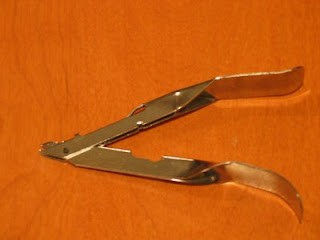 I did my best not to hurt him as I yanked the staples out. The first one gave me a bit of trouble, but after a few tugs I got the hang of it, and the second one was a breeze. I asked Rich if it hurt very much having them taken out, and he said, “Not really. Well, put it this way: it felt about the same as they did going in.”

Poor baby. Here’s hoping I don’t get the opportunity for more practice in the future.